Computes the unconstrained minimimum of given function with the Nelder-Mead algorithm.

This function searches for the unconstrained minimum of a given cost function.

The provided algorithm is a direct search algorithm, i.e. an algorithm which does not use the derivative of the cost function. It is based on the update of a simplex, which is a set of k>=n+1 vertices, where each vertex is associated with one point and one function value. This algorithm is the Nelder-Mead algorithm.

See the demonstrations, in the Optimization section, for an overview of this component.

See the "Nelder-Mead User's Manual" on Scilab's wiki and on the Scilab forge for further information.

a function or a list, the objective function. This function computes the value of the cost function.

See below for the details of the communication between the optimization system and the cost function.

a matrix of doubles, the initial guess.

A struct which contains configurable options of the algorithm (see below for details).

The flag associated with exist status of the algorithm.

The following values are available.

The maximum number of iterations has been reached.

The maximum number of function evaluations has been reached.

The tolerance on the simplex size and function value delta has been reached. This signifies that the algorithm has converged, probably to a solution of the problem.

A struct which stores detailed information about the exit of the algorithm. This struct contains the following fields.

The number of function evaluations.

The number of iterations.

A string containing a termination message.

the value of the cost function

It might happen that the function requires additional arguments to be evaluated. In this case, we can use the following feature. The argument costf can also be the list (myfun,a1,a2,...). In this case myfun, the first element in the list, must be a function and must have the header:

where the input arguments a1, a2, ... are automatically appended at the end of the calling sequence.

In this section, we describe the options input argument which have an effect on the algorithm used by fminsearch.

The options input argument is a data structure which drives the behaviour of fminsearch. It allows to handle several options in a consistent and simple interface, without the problem of managing many input arguments.

The fminsearch function is sensitive to the following options.

The maximum number of iterations. The default is 200 * n, where n is the number of variables.

The maximum number of evaluations of the cost function. The default is 200 * n, where n is the number of variables.

The absolute tolerance on function value. The default value is 1.e-4.

The absolute tolerance on simplex size. The default value is 1.e-4.

The verbose level. Possible values are "notify", "iter", "final" and "off". The default value is "notify".

The plot function, or a list of plotput functions. The default value is empty.

In this section, we describe the termination criteria used by fminsearch.

The criteria is based on the following variables:

the absolute value of the difference of function value between the highest and lowest vertices.

If both the following conditions

are true, then the iterations stop.

The size of the simplex is computed using the "sigmaplus" method of the optimsimplex component. The "sigmamplus" size is the maximum length of the vector from each vertex to the first vertex. It requires one loop over the vertices of the simplex.

The fminsearch algorithm uses a special initial simplex, which is an heuristic depending on the initial guess. The strategy chosen by fminsearch corresponds to the -simplex0method flag of the neldermead component, with the "pfeffer" method. It is associated with the -simplex0deltausual = 0.05 and -simplex0deltazero = 0.0075 parameters. Pfeffer's method is a heuristic which is presented in "Global Optimization Of Lennard-Jones Atomic Clusters" by Ellen Fan. It is due to L. Pfeffer at Stanford. See in the help of optimsimplex for more details.

The number of iterations

In this section, we present the default values for the number of iterations in fminsearch.

The options input argument is an optional data structure which can contain the options.MaxIter field. It stores the maximum number of iterations. The default value is 200n, where n is the number of variables. The factor 200 has not been chosen by chance, but is the result of experiments performed against quadratic functions with increasing space dimension.

This result is presented in "Effect of dimensionality on the nelder-mead simplex method" by Lixing Han and Michael Neumann. This paper is based on Lixing Han's PhD, "Algorithms in Unconstrained Optimization". The study is based on numerical experiment with a quadratic function where the number of terms depends on the dimension of the space (i.e. the number of variables). Their study shows that the number of iterations required to reach the tolerance criteria is roughly 100n. Most iterations are based on inside contractions. Since each step of the Nelder-Mead algorithm only require one or two function evaluations, the number of required function evaluations in this experiment is also roughly 100n.

The optimset function can be used to configure one or more output and plot functions.

The output function is expected to have the following header:

The input arguments x, optimValues and state are described in detail in the optimset help page. Set the stop boolean variable to false to continue the optimization and set it to true to interrupt the optimization. The optimValues.procedure field represent the type of step used during the current iteration and can be equal to one of the following strings

The plot function is expected to have the following header:

where the input arguments x, optimValues and state have the same definition as for the output function.

In the following example, we configure the absolute tolerance on the size of the simplex to a larger value, so that the algorithm performs less iterations. Since the default value of "TolX" for the fminsearch function is 1.e-4, we decide to use 1.e-2. The optimset function is used to create an optimization data structure and the field associated with the string "TolX" is set to 1.e-2. The opt data structure is then passed to the fminsearch function as the third input argument. In this particular case, the number of iterations is 70 with 130 function evaluations.

Example with a pre-defined plot function

In the following example, we want to produce a graphic of the progression of the algorithm, so that we can include that graphic into a report without defining a customized plot function. The fminsearch function comes with the following 3 pre-defined functions :

In the following example, we use the three pre-defined functions in order to create one graphic, representing the function value depending on the number of iterations. 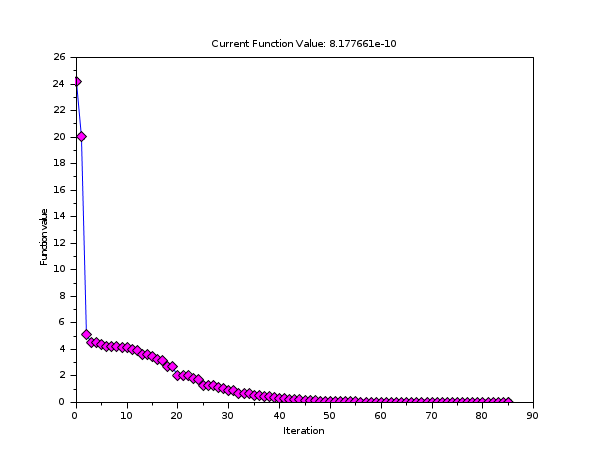 In the previous example, we could replace the "optimplotfval" function with "optimplotx" or "optimplotfunccount" and obtain different results. In fact, we can get all the figures at the same time, by setting the "PlotFcns" to a list of functions, as in the following example.

Example with a customized output function

The "Display" option allows to get some input about the intermediate steps of the algorithm as well as to be warned in case of a convergence problem.

Since the default value of the "Display" option is "notify", a message is generated, which warns the user about a possible convergence problem. The previous script produces the following output.

Notice that if the "Display" option is now set to "off", no message is displayed at all. Therefore, the user should be warned that turning the Display "off" should be used at your own risk...

In the following example, we present how to display intermediate steps used by the algorithm. We simply set the "Display" option to the "iter" value.

The previous script produces the following output. It allows to see the number of function evaluations, the minimum function value and which type of simplex step is used for the iteration.

In this section, we present an example where all the fields from the optimValues data structure are used to print a message at each iteration.

In the following example, we solve a modified Rosenbrock test case. Notice that the objective function has two extra parameters a and b. This is why the costf argument is set as a list, where the first element is the function and the remaining elements are the extra parameters.

In this section, we present some practical advices with respect to the Nelder-Mead method. A deeper analysis is provided in the bibliography at the end of this help page, as well as in the "Nelder-Mead User's Manual" provided on Scilab's Wiki. The following is a quick list of tips to overcome problems that may happen with this algorithm.

"A Simplex Method for Function Minimization", Nelder, J. A. and Mead, R., The Computer Journal, 1965